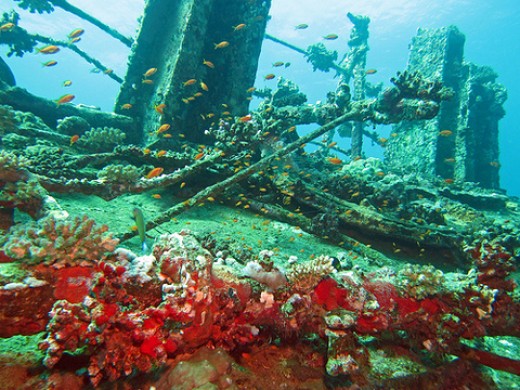 None or Light current

This wreck sits upright in depths of 27 m at the stern to just below the surface at the bow. The shallow depth accounts for the broken up condition of the wreck as the heavy seas have been wrecking havoc on the vessel since it went down in 1977. The cargo holds are empty as the cargo was removed in the effort to re-float the ship off the reef. You can penetrations into the galley and electrical room were made and as the seas were calm, the whole wreck was surveyed by the divers from bow to stern.” Captains Log, Sunday April 25, 1999 Jeddah.

The above entry was from the first Familiarisation Trip made by the European Tour Agents and is typical of what may be expected when visiting this wreck. If the visibility is not good here, then it’s best to pack your lunch and go home, for it won’t be good anywhere. There can be high swells when mooring on the buoy above the wreck, which can be irritating to any passengers left on board. Usually the boat pulls up on the leeside of the reef for the briefing and suiting up. This way the time exposed to swells is much less for the divers. A note of caution, the swells can cause sections of the broken up ship that weigh tons to move as much as 3-5 feet. In most cases divers can see and even hear the twisted metal moving moaning as the sea steadily claims her own. It is not wise to dive under these masses of metal or to be trapped or pinched between moving plates. The same goes for wreck penetrations that are risk in good conditions… they could prove fatal in bad circumstances. Proper training like Wreck Diving Specialties and common sense is well advised

I’ve dived most of the wrecks with Ann Ann being my favourite, start at the stern at 32 m and work your way up to 5 m at the bow.